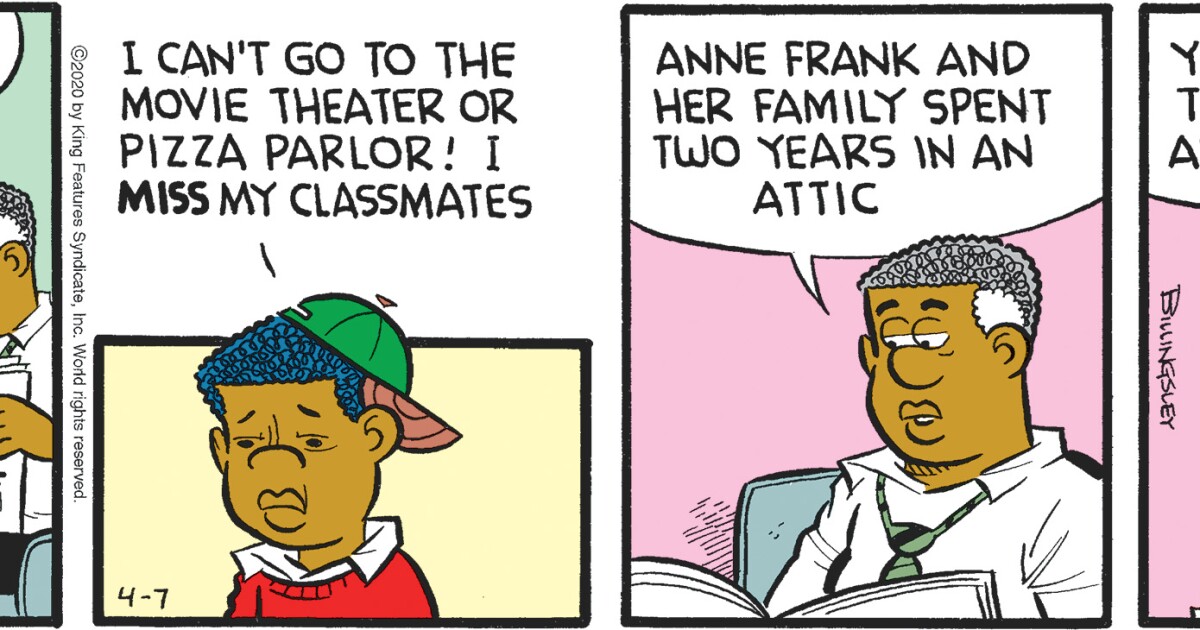 Comic book dilemma: Tackle the coronavirus, or not?

In the 35 years that Greg Evans drew and wrote the “Luann” comic, he tackled many difficult subjects. Rape by date. Menstruation. Cancer.

The novel coronavirus? Evans, a San Marcos resident, observes his own form of social distancing.

For now, he doubts his characters are directly addressing the pandemic or wearing protective masks. “I think readers want variety on comic book pages,” he said. “I don’t think they want to see everyone talking about coronavirus all the time.”

Lalo Alcaraz, the native of Lemon Grove who does “La Cucaracha”, finds the subject inescapable. “We are having this once-in-a-lifetime experience,” he said. “We are all in the same boat, we all have the same benchmarks. For me, it must be in there.

In one of his comics, a cafe employee expresses relief that a masked customer is a thief and not someone infected with the virus. In another, a parent with a school-aged daughter stuck at home realizes how difficult it is to be a teacher.

The same is true in the fun pages of American newspapers, as artists (and readers) debate whether comics should be an escape from the giant elephant in everyone’s living room, or a reflection of the one -this.

So far, most strips haven’t mentioned the pandemic, and it can be shocking to see characters eating in restaurants, flying out on weekend getaways, working in offices, and giggling during parties with friends and neighbors while much of the real world is shut down.

Part of virus avoidance is due to the individual nature of each strip. If it’s a gag-a-day comic like “Dennis the Menace,” how do you make jokes about something that kills people? If it’s a comic like “Luann,” with storylines that unfold over weeks or months, how do you introduce that new wrinkle into the plot without it feeling forced?

But a lot of the disconnect has to do with timing. The comic strips appear in the daily newspaper, but they are not made the day before. They usually have lead times up to eight weeks in advance.

“It’s a tough curve to try and hit,” said Jerry Scott, a San Luis Obispo writer who co-produced the “Zits” and “Baby Blues” tapes. “With the news cycle being what it is right now, eight weeks might as well be eight years. I’m hesitant to try to be too current.

When the novel coronavirus arrived, Scott and his collaborators (Jim Borgman with “Zits” and Rick Kirkman with “Baby Blues”) rushed to replace tapes that showed large gatherings of people. While they didn’t address the pandemic head-on, they also didn’t want it to feel like ‘Zits’ high schooler Jeremy or the ‘Baby Blues’ MacPherson family were breaking the rules. aimed at stopping the spread of the virus.

“We respect the idea of ​​social distancing and keep everyone close to home,” Scott said. “But in the tapes we’re doing now (which will run in July), we haven’t put masks on anyone because we don’t know how long those will be mandatory. It seems part of the job now is to be a bit of a fortune teller.

New York writer Francesco Marciuliano makes “Sally Forth” with Minnesota illustrator Jim Keefe. They had set up a comic series to air in late April about girlfriends Hillary, Nona and Faye going to a school dance. But as that calendar hour approached, school in most places moved online and dances were cancelled.

Their first thought, Marciuliano said, was to add letters to the finished tapes saying something like “This was written before the virus,” to give themselves some wiggle room with disappointed readers.

“But it just didn’t reflect what was going on,” he said. “We decided we couldn’t make a comic so far removed from what happens on a day-to-day basis.”

They scrapped a month of comics and created new ones that include the virus, he said. So this week, the Forth family launched an “Amazing Race” type competition to fight boredom at home. Last week, a different character attempted to talk about the pandemic with her mother, who struggled to offer more than “everything will be fine.” platitudes.

Connecticut cartoonist Ray Billingsley also turned to the virus for his strip, “Curtis.” He said the key has been to “keep the story flowing without it becoming too preachy or boring”.

In one series, Curtis learns that his teacher has tested positive for coronavirus. In another, he complains about not being able to go to the cinema or the pizzeria. Her father stops the moans by telling her: “Anne Frank and her family spent two years in an attic.

Billingsley said he got this idea from a conversation he had with a friend, who was also lamenting the stay-at-home rules. “What we’re going through is terrible, people are dying, but we’ve been through worse,” he said. “I think it can be useful to remember that.”

“I’m not saying it’s unusual; it’s just haters are generally more motivated than fans,” said Alcaraz, who was named a Pulitzer Prize finalist for editorial cartooning on Monday. “I guess everyone is at home in front of a laptop and they’re texting me.”

Alcaraz said it helps that he has a shorter turnaround time than most cartoonists — around 10 days — which makes his strips feel fresher. He and his assistant, Joaquin Junco, are already talking about comics that will address the gradual easing of societal restrictions that are just beginning in California.

“I think everyone is sick of the bad hair jokes anyway,” Alcaraz said.

The response to “Luann” has been mixed, according to Evans, who is now writing the tape with her daughter, Karen. “Some readers say they really appreciate that the tape doesn’t talk about the coronavirus,” he said, “and others wonder how Luann and everyone else can ignore this global and historic phenomenon as they live their lives cheerfully.”

Ultimately, he said, “you have to do what suits your characters and your story.”