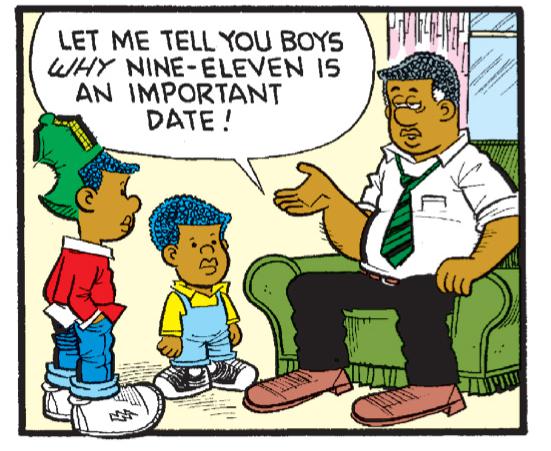 
Thumbs up to Stamford resident Ray Billingsley, who won the Reuben Award for Outstanding Cartoonist of the Year from the National Cartoonists Society. Billingsley, creator of the “Curtis” comic book, won the industry’s highest honor on Oct. 16, joining a group of former winners such as longtime Stamford colleague Mort Walker (“Beetle Bailey”) , Alex Raymond (“Flash Gordon”) and Ernie Bushmiller (“Nancy”) as well as other legends such as Charles Shulz (“Peanuts”), Walt Kelly (“Pogo”) and Bill Watterson (“Calvin and Hobbes”) . “It was a huge step for me,” Billingsley said. “And also a monumental milestone for the NCS, as I am the first black person to win the prestigious Reuben Award, and for that I am so grateful.”


Thumbs up in football from the University of Connecticut. The team didn’t make it easy, and the opponent wasn’t exactly a world beater, but UConn’s beleaguered football team earned its first victory in two years last weekend with a victory over Yale. This is a team with no permanent coach, no conference, or little interest in the state lately, which happens when you’re in the middle of a decade-long drought. But the players deserved a day to celebrate, and after coming close twice in recent weeks, they finally held on for a well-deserved notch in the win column. Next up is Middle Tennessee on Friday.


Thumbs up increased availability for telehealth appointments. A necessity at the start of the COVID pandemic, as many people were forced to stay home for safety reasons, video visits to doctors’ offices have become a staple of daily life over the past couple of years for many. Now, more and more insurance plans are offering coverage for these remote visits, often at a discounted rate. There are downsides – there’s no way to be as thorough on a video link as in person, for example, and crucial signs could be missed. But for routine appointments, including check-ins, there’s no reason people shouldn’t have the option of skipping the car trip and seeing their doctor from home. It is a step towards more accessible health care for all.


thumbs down to an ongoing possibility of contracting mosquito-borne diseases. Scientists say a wetter than average summer has mosquito levels at their highest level in 20 years and warn of three mosquito-borne diseases that are most dangerous to humans in October after being transmitted from birds to mosquitoes during the summer. Although eastern equine encephalitis is rare, it can be fatal to those who catch it. Two other serious illnesses, West Nile virus and Jamestown Canyon virus, can cause neurological or flu-like symptoms. With a difficult diagnosis and cures yet to be found, they are best avoided if possible.


Thumbs up to a new federal effort to tackle “chemicals forever.” The Biden administration announced Monday that it will require chemical manufacturers to test and report the amount of perfluoroalkyl and polyfluoroalkyl compounds, or PFAS, in household items like duct tape, nonstick pans and heat-resistant furniture. spots, in the first step towards reducing their presence. in drinking water. Connecticut is well aware of PFAS via their presence in firefighting materials, including a spill from Bradley Airport that polluted the Farmington River in 2019. Any action to reduce the presence of these harmful substances is welcome.


Thumbs up to a bill passed this year to create a task force to study the effects of psilocybin, the psychoactive substance in so-called “magic mushrooms”. Although primarily known as a recreational drug, psilocybin has been shown in some tests to provide real benefits to people suffering from a variety of mental health conditions, including depression and post-traumatic stress disorder. This research has taken on new urgency as diagnoses of mental health conditions continue to rise in the United States. A task force is a far cry from legalization, but it could be the first step toward real help for those in need.