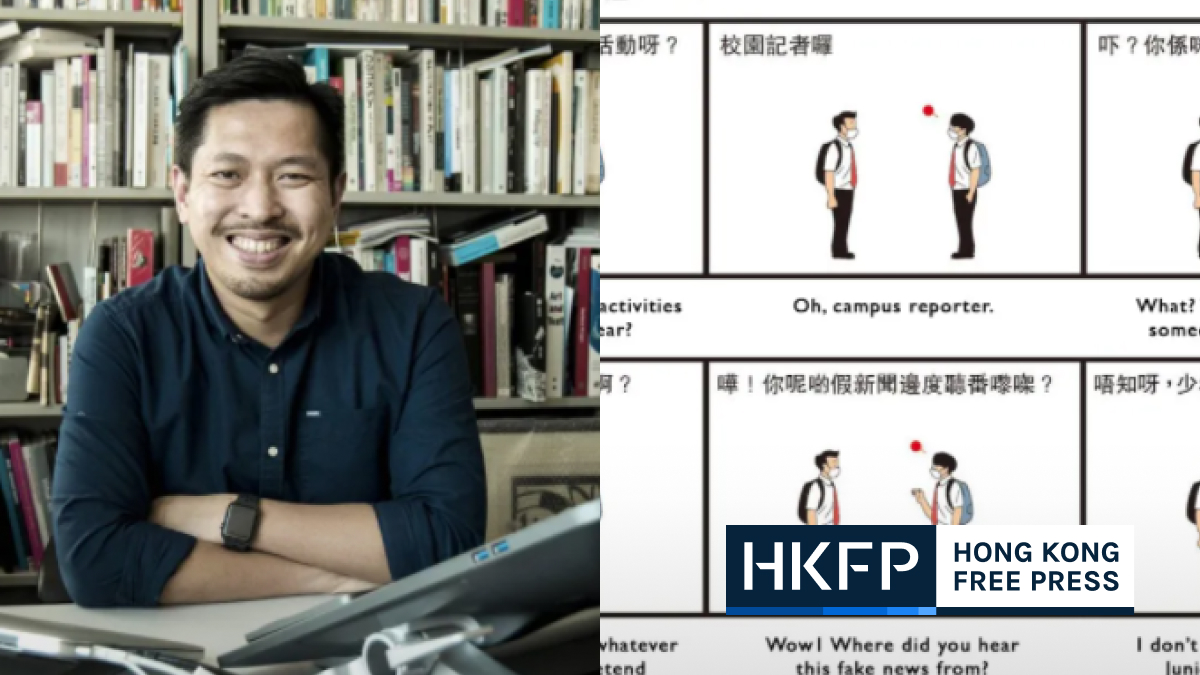 A Hong Kong cartoonist has apologized to police for a satirical cartoon that linked the Junior Police Call (JPC) organization to a controversy over the city’s main news group.

His apology followed a letter of complaint from the police, who are embroiled in a separate dispute with the Hong Kong Journalists Association over his allegedly unprofessional activities.

Apple Daily, the city’s only opposition daily, was shut down this summer and the government is considering imposing a law to tackle what it calls “fake news”.

In a letter to Justin Wong Ciu-tat, assistant professor of visual arts at Hong Kong Baptist University, the force accused him of “slandering” the JPC and making “baseless accusations”. He demanded that he provide a clarification.

“The police express their deep displeasure and concern at the unreasonable allegations in this cartoon,” she said in a statement.

“As a university staff member and an educator, Mr. Wong should carry the spirit of seeking truth and developing talent,” he said. “Regarding Mr. Wong’s use of a newspaper platform to make baseless accusations, defame and slander members of the Junior Police Appeal for no reason, the police express deep regret. “

The head of security himself was accused by the HKJA of spreading lies about the association.

Wong’s comic published last Friday in the Ming Pao newspaper featured two students discussing their extracurricular plans for the new academic year. One of them said he wanted to be a campus reporter.

“Do you think you can do whatever you want when you pretend to be a journalist?” asked the other. “Where did you hear this fake news? asked the other. “I don’t know. From a friend of the junior police call,” was the response.

The cartoonist later apologized for the cartoon, saying he respected the JPC, according to RTHK.

Wong had drawn political cartoons for the newspaper in a column titled Gei Gei Gaak Gaakin reference to “gossip,” since 2007. He told the newspaper it was the first time he had received such a letter of complaint from the police.

Created in 1974, the Junior Police Call is a police program aimed at fostering “respect for the law” in children from the age of six through boot camps and community activities.

The cartoon appeared to be no longer available on Ming Pao’s website after the police complaint letter. HKFP has contacted the newspaper for comment.

The cartoonist echoed phrases used by city security chief and former police chief Chris Tang last week to accuse the city’s press union of ‘hiring students’ without any qualifications for join the group.

The Hong Kong Journalists Association pushed back against Tang’s claims, saying they were “factually incorrect”.

The city’s current police commissioner, Raymond Siu, echoed the security chief’s accusations on Saturday, questioning whether the HKJA was professional and impartial.

“The HKJA said ‘everyone can be a journalist’. Is it a professional group? I think everyone knows that in their hearts,” he said.