Can you believe we’re only 9 numbers away from 200? It’s wild to me. 200 weeks (more, counting the breaks we take at the end of the year.) Before we get to that, though, we have more “Dr. Frost” and two other comics with titles that I love: “Here There Be Dragons” and “Duncan and Eddie”. The second is nice and mundane but the first sounds like a high seas wonder. And we can all use a small miracle from time to time.

Don’t forget to go on an adventure in this issue of The Webcomics Weekly.

What chapters they were. After the high-intensity, paranoid thriller that was “Blind Spots,” we’re back to the usual detective story antics that “Dr. Frost” built upon. It’s a familiar setting and familiar setup, by design. I could be mad at all the repetition, but Lee’s presentation of the interrogation is so engaging and multi-layered that I could read eight chapters of the same thing in slightly different detail and be totally satisfied.

I said a few weeks ago that the first chapter of “Eggshells” wasn’t particularly engaging, being mostly exposition, which is still true. However, episodes 2 and 3 are excellent follow-ups, refocusing the experience not on the information gained but on how the process is handled by Seonga. With Frost gone and now Changgyu as well, the story once again allows itself to dig into what makes her tick and sets her apart from these other characters. Essentially, the repeat interrogation is meant to better contrast Seonga not only with Frost but also with herself.

We get this wonderful flashback to his time in America, with

Along with these conversations is also the questioning and maturing of Seonga’s skills. Her intuition and quick decisions do what Frost couldn’t do with less damage to the interviewee, and best of all, she can lead others along the way. I love how Lee portrays the moment when the character they’re interviewing finally overcomes the fear that kept them from being honest. A glass of water, the surface tension is ready to break, then a single drop. A tear, perhaps? And it all overflows.

Seonga got it. She knew what to do and how to do it in a way that helped the person instead of tormenting them. She has grown a lot since the start of this season and she still has a long way to go.

Essentially, that’s not even his final form. 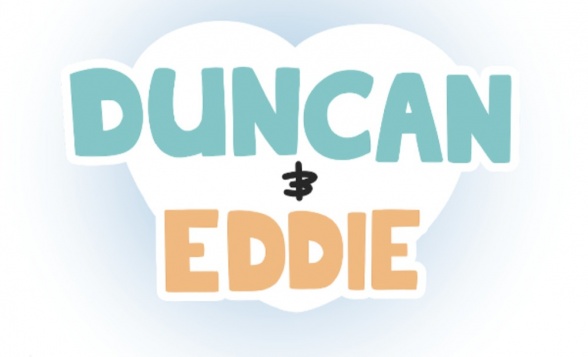 “Duncan and Eddie” is an incredibly cute comic about a couple in a new relationship. Each episode is a four-part short story about Duncan, Eddie, or both together. Duncan is an alligator and Eddie is a mountain goat (I believe). They cruise together while Eddie comes out as gay to his family.

The art style is cute and a little sketchy, which adds to the charm of the little stories. Duncan and Eddie themselves look like standard comic book anthropomorphic animals, with cute facial expressions against simple backgrounds that don’t distract from the characters. There’s no explanation as to why they’re animals or why a goat might want to date an alligator, but I don’t think those things are necessary for these tiny episodes and would distract from the fact that Duncan and Eddie are cute. Don’t think too much about logistics, that’s not the point.

You learn which character is which through dialogue clues, but since they’re two very different animals, literally, it’s not hard to remember or tell them apart once you’ve read a few. There is only one ongoing story arc in the eighteen episodes available so far on webtoon. Other than these, each episode’s story is self-contained and can be read out of order. The ongoing story beginning with episode twelve enters Eddie’s journey by dating his sister, then his mother. So while there’s an undercurrent of stress under Eddie about his identity being revealed, the energy and vibe of the comic is overwhelmingly positive. I don’t know how things will turn out, but based on the rest of the comic, I think he and Duncan will be fine.

If what you need to brighten up your summer reading is a cute, animal-friendly slice-of-life comic, “Duncan and Eddie” is a great choice. Don’t look for complex plot or heavy angst in this strip, because you won’t find them. “Duncan and Eddie” is cute without being sweet, and episodic enough that no additional background reading is needed to get started.

Here there are dragons

“Here There Be Dragons” has been running for a while now and I’m surprised I haven’t heard about it sooner. “Dragons” is a black-led fantasy – technically speaking I think it’s more of a low fantasy given the mythical nature of dragons, but the use of magic and brilliant aesthetics give everything a burst of high fantasy – adventure. Which isn’t something you typically see a lot. The setup of this story is generic; our erudite main character Bree, a Dragonspeaker, is contacted by mythical dragons and embarks on a quest to save them and the world.

At the same time, courtly intriguers from various nation-states and mercenary companies threaten to become involved in this already perilous journey to the end of the world. What makes this tape shine is how the creative team takes that basic premise and puts so much life into it that you don’t really care. Disteal and Rafa AD, the art team, brought this cast of characters to life so much that even though they are tropes themselves (the bickering couple, the haughty warrior, himbo), they are already threatening to push the beyond their obvious point of reference.

Whoever is in charge of the layouts, I fix my most common complaint about vertical stripes: the gutter space is too big! Although these strips are still primarily made up of square to rectangular panels, the gutter space between them is never too large to impede sequential flow. This flow is important to push through dysfunctional party dynamics. Which in turn uses the disconnection of these panels as a representation of the teams’ overall lack of unity. This is especially clear in Episode 4 as they fight an Undersider Cave-Sprung. This rhythmic use of paneling also plays off the growing annoyance and progressive slights against Bree who, despite being the nominal leader of the party, is not the least bit listened to. Although that may change after Episode 5, when she annihilates said monster.

As mentioned earlier, the coloring and overall aesthetic of this band gives it a high fancy sheen which is just plain pleasing to the eye. The rich color palette almost hides the linework at certain points, giving everything a digital, painterly feel. Reminds me of looking at Pixar’s concept art of how they treat dominant colors in individual panels/strips as indicators.

This is one of the best-composed comics I’ve read on here in a very long time. It’s worth checking out only on this technical level, but the story and character work will also draw you in.