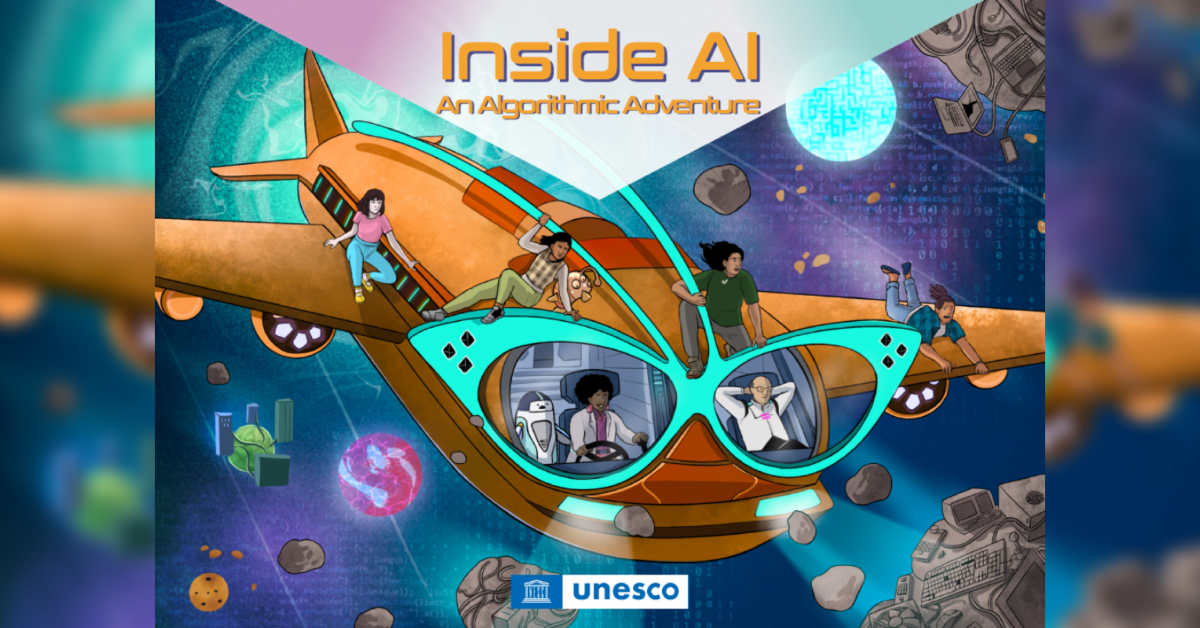 Five questions about the UNESCO comic on artificial intelligence

As part of UNESCO’s work to harness emerging technologies for sustainable development, Inside AI: an algorithmic adventure helps young adults explore the impact of artificial intelligence on humanity.

Nashilongo Gervasius Nakale (Namibia University of Science and Technology) interviewed Katie Evans, PhD in Philosophy and Ethics of Artificial Intelligence and author of Inside the AIto explain the intricacies of AI.

Q.1 The graphic novel is divided into four episodes, each of which tackles a major concept related to AI. What was the selection process and what are the main themes of the novel?

AI is incredibly multifaceted and affects each of us in many different, and sometimes surprising, ways. Initially, it was difficult to choose not only which concepts to focus on, but also how to string them together without losing the reader. There are at least 16 core science concepts in the novel, but the main topics we covered were the digital divide, algorithmic biases, echo chambers, and the environmental impact of AI. Ultimately, our goal was to leave the reader with a comprehensive and entertaining take on some of AI’s most pressing social and ethical issues, and to incorporate as much science as possible along the way.

Q.2 How difficult was it to adapt a subject as complex as AI into a comic? Was there a process you followed to simplify the concepts without stripping them of their scientific value?

To tackle [the abstractness of AI] without turning the novel into a textbook, my idea was to portray AI as a place rather than an object or a concept, and to make this place the setting of the story itself. That gave rise to this alternate algorithmic universe called Plethor.AI, which is basically a big, extended metaphor for what today’s AI might look like from the inside out. From there, much of the adaptation happened on its own: the platforms became planets, the “cloud” became a sort of milky way stretching across the galaxy – there’s even an asteroid belt of electronic waste!

Q.3 You worked with a team of illustrators to produce the novel. Were there any key messages that you collectively wanted to convey when writing the screenplay, beyond the issues of AI?

Yes! There was definitely a collective desire to showcase diversity and be inclusive in how the story was told. Some voices, such as those of women or those from underrepresented regions of the world, deserve to be heard much more in the debate around AI. Our way of approaching this was not only to develop characters from various places such as Latin America, Africa, the Middle East and Oceania, but to infuse the setting, aesthetic and script each episode with as much cultural accuracy as possible. We were lucky to have an all-female team of very talented illustrators, themselves from these regions, and whose very rich and enthusiastic work certainly brought the project to life.