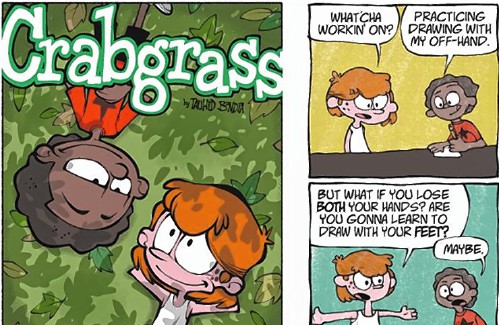 Introducing some changes to our Sunday comic range

When you publish a journal, change is no joke. That’s true, even if you’re talking about the fun pages.

Many of our long-time readers tell us that they turn to the daily comics page and the Sunday comics section to start their day. They find them humorous, insightful, evocative and provocative. They know what they like and what they could do without. We know because we asked.

And many have responded. In a recent poll, we received votes from over 330 print readers, revealing what they liked most and what we should consider adding. We announced earlier this summer that we were taking a close look at spending across our business to rein in escalating newsprint costs. We knew we needed to trim a few Sunday strips so we could fit them into the newspaper itself, rather than a separate inserted magazine. We asked our readers to be our guide. After the survey, we had a better understanding of what we should keep, what we would miss the least and what we could add to the lineup.

We have long published 22 comics in our Sunday magazine. Starting September 4, we’re reducing that number to 18, and they’ll end up in the Sunday D section. No changes are planned for our daily comic book lineup.

What we keep: Zits received the highest rating in our survey, where we asked readers to name their 10 favorites. We will also keep Pickles, Doonesbury, For Better or Worse, Dilbert, Pearls Before Swine, Peanuts, Bizarro, Baby Blues, Blondie, Foxtrot, Garfield, Rhymes with Orange, Rose is Rose and Family Circus.

What we add: There will be three new bands added to our lineup. Two came on the recommendations of our readers and our union. The other makes its long-awaited return.

In 2019, the Monitor was among many newspapers nationwide that canceled the popular strip Non Sequitur when author Wiley Miller slipped a Trump-themed profanity into his strip. Before anyone knew it, he sent a message on Twitter to his readers that he had left them an “Easter egg”. This violated many principles of publishing a local newspaper, and we decided to end the relationship. There were more than a few readers who canceled, and many more who threatened to do so. It’s still hard to hear, but we continued to hold our own over the next three years. A reader recently told me he disagreed with what Miller did in 2019, but said, “Come on, doesn’t he deserve another chance?” He is right. Miller has paid his dues and it’s time to bring him back.

When we look at new strips, Crabgrass came across as the one we should add. Written by Tauhid Bondia, the popular online strip has been picked up in recent months by newspapers around the Los Angeles Times to Miami Herald. It is set in the 1980s and features the adventures of two best friends. The strip gained a young and diverse following, and Bondia has said in published reports that his strip reflects something he didn’t see much from reading newspapers as a child.

“It’s not something that I didn’t really question until I was much older,” he said. “So it was important for me to have a black character in my comic because I’m black and I think that’s an important voice to have there.”

We will also be adding Sherman’s Lagoon to our list. It came in second on requests from Calvin and Hobbs, which is not available for purchase. Written by Jim Toomey, Sherman’s Lagoon was launched in 1991 and remains popular around the world. It takes place on a fictional island in the South Pacific Ocean and features the affable shark Sherman and a cast of undersea misfits.

The migration of Sunday comics will have a few other implications.

First of all, we will no longer print the Sunday TV guide. This product, which includes the upcoming week’s TV schedule, has proven less useful as technology advances and most newspapers stopped printing it years ago. For those who depend on it, however, we will continue to maintain it as part of the electronic edition, which is a digital replica of the newspaper.

There is also something we add to the mix. We’ve reinvested some of the money we’ll save on printing costs to hire an arts and entertainment writer. Kelly Sennott, formerly of the Hippo, joins us with a weekly article about the people, places and events that make the Greater Concord area a thriving hub for the arts and fun activities. Look for her front-page stories every Wednesday and in our weekly Monitor Marquee newsletter.

2022-08-28
Previous Post: The biggest global companies involved in The Growing Webcomics
Next Post: Slice of Life Webcomics You Can Read Right Now