Cartoonist Azmi Hussin Kami SAGA The comic is now the longest running comic in the country, according to the Malaysia Book of Records (MBR).

The Butterworth, Penang-born artist used 510 strips of paper (A4 size) to create the 151m long comic strip. On December 12, the Kami SAGA The comic was launched at an MBR ceremony at Penang City Stadium, which saw veteran cartoonist Datuk Lat as guest of honor.

The Proton Saga, the first Malaysian national car introduced in 1985, is the star of Kami SAGA. Traveling from Penang, then Ipoh and finally Melaka, it’s a story of family, friendships and Malaysia’s multiculturalism.

“I was inspired after watching Oh Bola. It was a truly Malaysian film where every community had equal representation. There was no hero per se. It was the subject of football itself that was the central character so to speak.

“And I wanted to create something like that with my comic. That’s why I made Proton Saga the hero of Kami SAGA“reveals Azmi during a telephone interview.

The artist started working on his comic in November and devoted eight hours to it every day. He completed the comic in 30 days. In a frantic race for the finish line, the father-of-three spent 24 hours finishing Kami SAGA before submitting it to the MBR on December 11.

“It was crazy but I guess that’s normal for an artist!” he said laughing.

In the comic, a Malay family in Penang buys a Proton Saga. The owner’s son develops an unexpected bond with the car.

The Proton Saga was then sold, after the death of the owner, to a couple of Ipoh Indians. Finally, the car was sold to a Chinese in Melaka, who thought the Proton Saga had brought him good luck.

Years later, the original owner’s son discovers the Proton Saga in Melaka and reunites with his favorite car.

Azmi’s project to create the longest running comic (in Malaysia) started in 2018.

But he could not finance his dream. After receiving a RM10,000 grant from Yayasan Hasanah’s Art For All Seasons this year, he was able to afford to finally start the project. 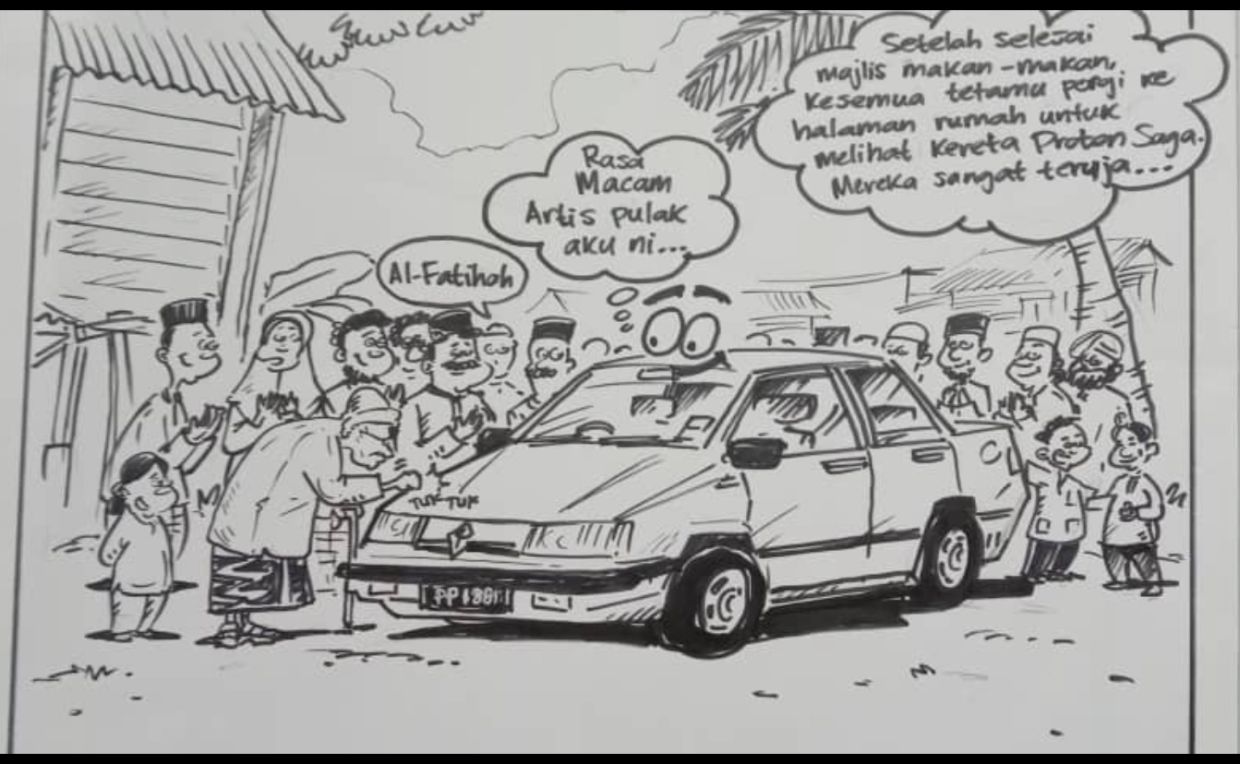 In the comic, a Malay family in Penang buys a Proton Saga. The owner’s son develops an unexpected bond with the car. Photo: Azmi Hussin

Apart from Kami SAGA, Azmi has been busy with a series of commissioned murals in cafes and schools in George Town. He also spent three months finishing his new book Tanjong Life: the new normal, supported by the George Town Festival. It was a comic that was entirely created during confinement.

As for Kami SAGAAzmi hopes to have the comic released as a book.

“I thought it would be great to release it as a book and have it in libraries across the country because of the family and multicultural themes of the comic. I would like it to be an inspiration for Malaysians,” he concludes.