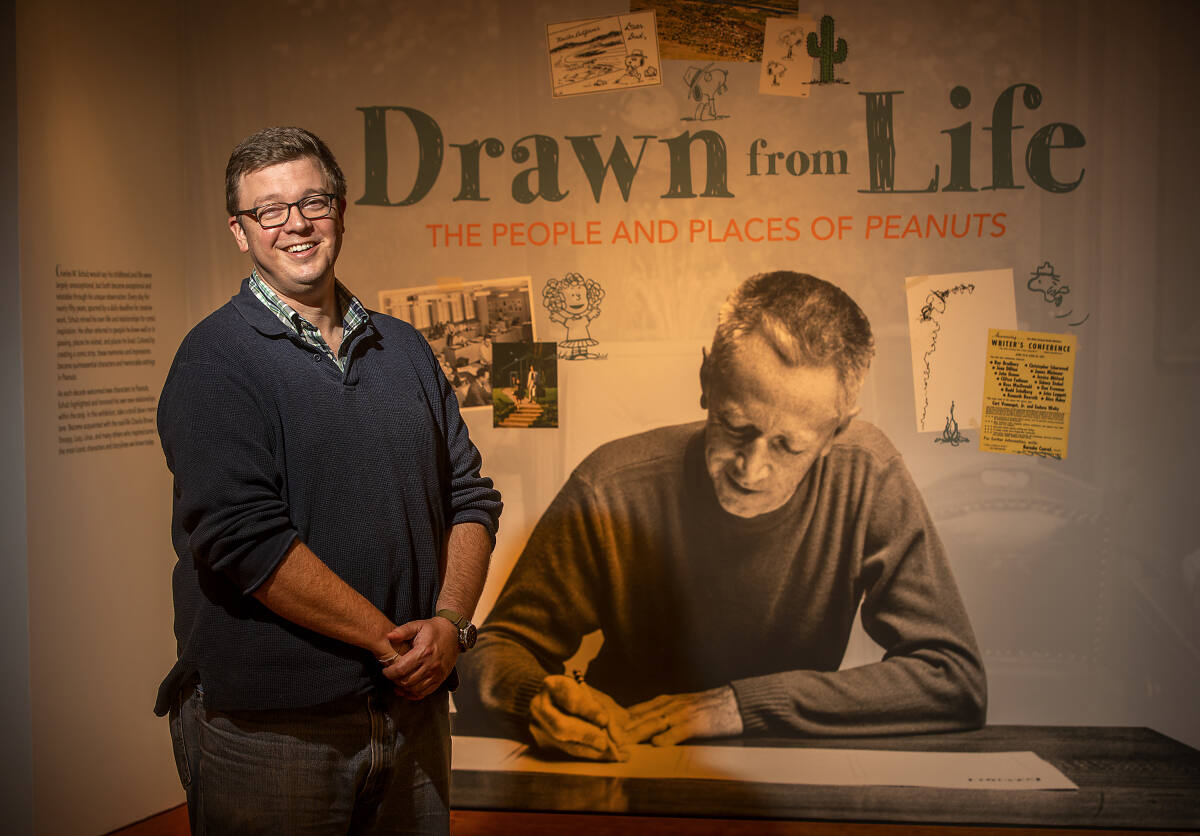 “There are places I remember all my life, even though some have changed,” the Beatles sang at the start of “In My Life.”

“I know I will never lose my affection for people and things that have come before,” the song continues.

The same could be said of the current exhibit at the Charles M. Schulz Museum in Santa Rosa, “Drawed from Life: The People and Places of ‘Peanuts’,” which runs through mid-March this next year.

Benjamin Clark, the museum’s curator, sees the exhibit as an important prelude to the 100th anniversary of Charles Schulz’s birth next year. The museum will also celebrate its 20th anniversary next year.

Schulz was born in Minneapolis, Minnesota on November 26, 1922, and grew up in Saint Paul. He moved to Sonoma County in 1958 and lived in Sebastopol before moving to Santa Rosa, where he died in 2000, after writing and drawing the “Peanuts” comic strip for nearly 50 years.

So it’s no surprise as you walk through the Drawn from Life exhibit to see comic strips in which Charlie Brown talks about Bodega Bay or shows Snoopy heading for the World Wrist Wrestling Championship in Petaluma. .

But the identities of the people Schulz knew, both in Sonoma County and Minnesota, feature even more prominently in the exposed tapes.

Take the mysterious little red-haired girl, object of Charlie Brown’s unrequited affection, who we never see in the comics. First referenced in “Peanuts” in 1961, she was based on Donna Johnson of Minneapolis. Johnson worked at Art Instruction Inc., a correspondence school where Schulz worked before moving west.

“She worked there in the accounting department and he was an instructor,” Clark said. “She and Schulz dated, and he even proposed after he sold ‘Peanuts’ to the syndicate, but she turned him down.”

Peppermint Patty, who excelled in sports but slept through class, got her rarely used surname from Sue Reichardt, according to the curator.

“Sue was one of Schulz’s secretaries in Sevastopol,” Clark said. “In the comics, Peppermint Patty’s last name is Reichardt.”

Patty’s source itself is another matter.

Schulz modeled Peppermint Patty after a favorite cousin, Patricia Swanson, who served as a regular inspiration for “Peanuts,” according to multiple sources, including a new Apple TV+ documentary, “Where Are You, Charlie Brown?”

“The cousin idea is the speculation of David Michaelis in his book,” Clark explained, referring to “Schulz and Peanuts: A Biography,” published in 2007.

“It’s probably not bad speculation, but Schulz hasn’t publicly stated that his cousin Pat Swanson was the inspiration for Peppermint Patty,” the curator continued.

The source of the name may simply be peppermint candy, Clark said.

Studying the “Peanuts” tradition is serious business. After all, the full name of the museum is the Charles M. Schulz Museum and Research Center.

This idea was scrapped once Schulz learned of a comic book dog character named Snippy, who was too close to be comfortable. An issue of this comic strip is included in the exhibition.

“Schulz saw the comic at a newsstand,” Clark said. “It would have been right after losing the argument over the name of his band ‘Peanuts,’ a name he never liked.”

Schulz had hoped he might call the band “Li’l Folks”, but the union’s legal counsel said no. It was too similar to an older tape called “Little Folks”.

So Schulz suggested “Charlie Brown” or “Good ol’ Charlie Brown” as replacements, but was told neither would work, for copyright reasons. The union opted for “Peanuts”.

“So he’d had the name Sniffy in his head for the dog, saw this comic on a newsstand, and realized he needed a good replacement name to suggest,” said said Clark. “Otherwise the union might name the dog something it hated, and it would be stuck with it.”

It was then that Schulz recalled his mother saying something like, “If we ever got another dog, Snoopy would be a good name.”

“She was probably using a Norwegian term for endearment, meaning lover, ‘Snuppa.’ I understand it’s now an outdated and little-used term,” Clark said.

The story goes that Snoopy’s original designs were inspired by Spike, one of Schulz’s childhood dogs, who became the name of Snoopy’s brother living in the desert.

Band names that came from real people were given to both important characters and smaller players.

Snoopy serves as a scout leader for his birdie boyfriend, Woodstock (a nod to the rock festival after the character went anonymous) and his pals. The only female bird in the troop is called Harriet.

That name comes from Harriet Crossland, whom Schulz met in 1969 when he opened his rink, the Redwood Empire Ice Arena, now known as Snoopy’s Home Ice, Clark said.

After the character’s introduction in the comics in 1980, Press Democrat columnist Gaye LeBaron wrote, “The real Harriet responded immediately to her newfound fame by showing up at Sparky’s studio wearing angel food cake with seven icing. minutes. His entire staff joined in the impromptu tea party. It’s the pleasure of having a designer in residence. You can watch familiar names come back from time to time.

One of the most prominent namesakes in the “Peanuts” canon is Linus, given to Lucy’s philosophical little brother. He was named after Linus Maurer, a longtime cartoonist for the Sonoma Index-Tribune, who had a long friendship with Schulz.

The list of local and personal references is long, and the tantalizing bits of information will keep you browsing with interest as you navigate through the exhibit.

“This exhibit is important,” Clark concluded, “as we learn about these beloved characters and understand their origins.”

You can reach editor Dan Taylor at dan.taylor@pressdemocrat.com or 707-521-5243. On Twitter @danarts.

This story has been updated to correct the spelling of Sue Reichardt’s last name.