Last month, the highly anticipated anime adaptation of the Filipino comic, “Very”, has caused a lot of buzz online. Of course, some of the attention was in the form of backlash against the choice of dubbing, but it paved the way for more local comics to be exposed to the masses. In order to really put these works in the spotlight, sites such as Penlab served as a platform for local artists.

According to their website, Penlab is “an initiative to bring quality Filipinos komik together in the same place. » Their goal is to provide a space for Filipino comic creators to get the reach their works deserve. Home to approximately 830 titles of original Pinoy content, its library is always open to accepting new webcomics for artists.

Seeing the vast amount of captivating and visually appealing comics you can find on Penlab will surely make you glow with Pinoy pride. To reignite your interest in local content, here are 10 titles you should add to your binge-watching list.

Written and illustrated by Drew Borja, “Hunghang Flashbacks” is a collection of short, usually 4-panel comics. It ranges from random jokes to hilarious encounters a typical Pinoy faces in life, told through eight different characters that form a goofy barkada. It currently has 35 episodes on Penlab and is still ongoing.

The comic has created its own website, where you can also browse published episodes. He also has his physical copies and its own line of merchandise available for people to buy.

Show your support for Drew Borja via his Facebook page for “Hunghang Flashbacks” on the right here.

“Nagmamahal, Maria Clara” tells the story of our titular character from the Spanish period who suddenly finds himself in the modern era. She wanders in the middle of a busy street until she meets Jenny, PA of a director arranging auditions for the role “Maria Clara”. Thinking she’s in costume for the audition, Jenny takes Maria Clara to the studio, and eventually into showbiz.

This ongoing series is written and illustrated by Marianie, who mentions in the comic that this work was done for her thesis. It currently has 7 episodes released.

Another work by Marianie, “Palaso”, is a one-shot comic involving a bit of mythology. Our main character, nicknamed Dark Cupid, is a god whose job it is to remove Cupid’s arrows from mortals who have fallen in love or eventually evolved. In an unexpected circumstance, he meets Joy, a girl who has a lot of Cupid’s arrows stuck in her back. It’s a heartfelt story about falling in love and moving on.

4. Ang Jowa Kong on the Cross

“Ang Jowa Kong on the Cross” is an ongoing comedy series written and illustrated by Tsambolero. It tells the story of the life of the gay couple Tomas and Leo whose relationship is more than meets the eye. Thomas is a manananggal—a self-segmented folk creature of the night. Their adorable and funny antics might make you reconsider the whole image of the manananggal in Filipino folklore.

You can join Tsambolero on Twitter and support them here. 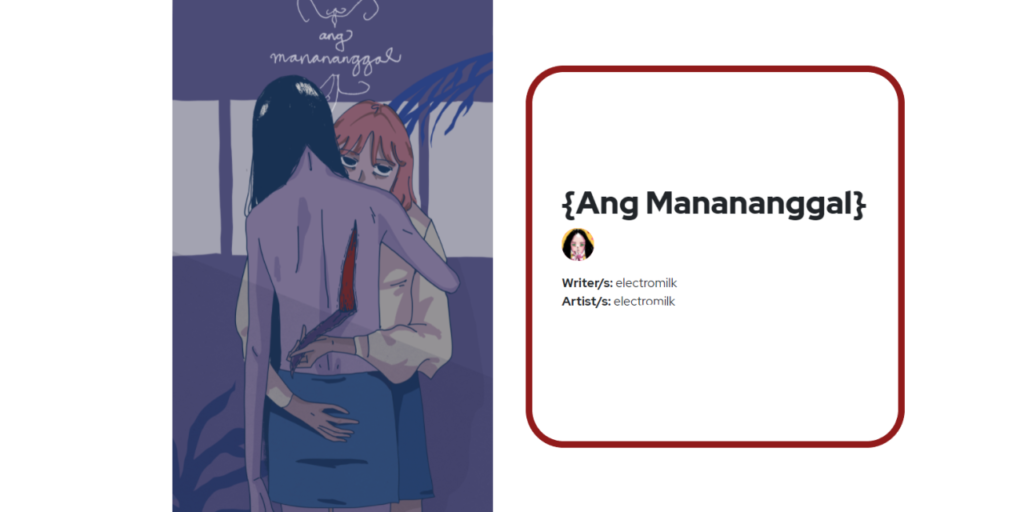 Speaking of these creatures, “{Ang Manananggal}” is a comic book written and illustrated by electromilk. It revolves around a high school girl named Anna, who has the same nightmare of being chased by a manananggal. As classes finally open at her school, she meets Maria, a transfer student who looks eerily similar about her nightmares.

Currently with 6 episodes posted, we dive into Anna’s life as she is haunted by this being who is very interested in her pregnant mother. 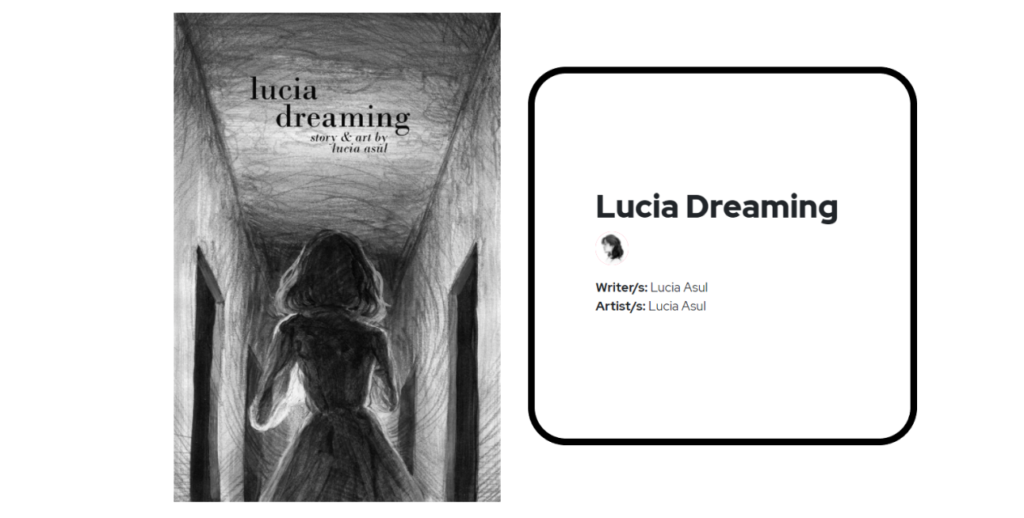 In an anthology series made up of her dreams and hallucinations, Lucia Asul illustrates and recounts what she remembers. “Lucy dreams” evokes a spooky feeling with its black and white designs. This English language series currently has 3 episodes and is one of the most watched comics in the indie genre.

Show your support for Lucia Asul through her Facebook page and she Patreon.

Explore the reimagined version of colonial Philippines by “Katipunera Warrior”, written by Bernie Mercado and Nina Torralba with illustrations by Sampay. The story is about a little girl called a demon by its inhabitants – a product of the sin committed by her mother, Mahinhin. Determined to save her people during a disaster, she is aided by the soul of a bakulaw, who also appears to call her mother “inay”.

Show your support for this comic via its official Facebook page here. 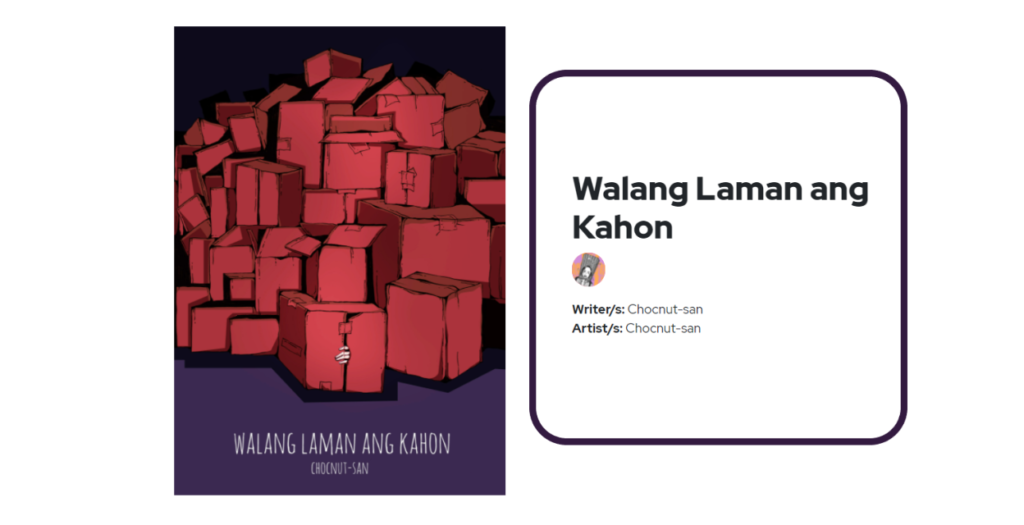 Ready for something a little weirder? Go ahead and try the one-shot comic “Walang Laman ang Kahon” written and illustrated by Chocnut-san. It is told from the perspective of Rosanna, a girl from Tacloban who flew to Manila for a job to give her mother and sister a better future. You’ll be sure to feel the creeps with our main character as there seems to be something sinister following her, hiding in a cardboard box.

You can find more of Chocnut-san’s creations at Facebook.

How about some palate cleanser to get rid of those weird vibes? “Uh! If Crush!” is an ongoing romantic comedy series from Gaby Taylo and Richard Mercado. The main character, Juan, believes that his crush (Isay) loves his much more attractive best friend (Kasi), so he acts like a wingman for her even if it stings. Unbeknownst to him, Isay is very fond of Juan and wonders why Juan always mentions his best friend to her.

Join Kasi’s exasperation as Juan stumbles all over the place in order to reach his crush who already loves him back. More of this comic can be found on his official website Facebook page.

Undoubtedly the most popular on this list, “Life in Orange” by Lizmi is a student-centric feel-good series about friendship and stereotypes. The story begins with a boy named Vito, who is annoyed because he’s stuck with Kahel, the transfer student he’s supposed to help adjust to the class.

Vito finds this boy quite odd, due to Kahel’s feminine tastes and outgoing nature. Read as Vito’s societal opinions are challenged by his blossoming friendship with the new kid.

This finished comic was based on the author’s bittersweet friendship with a girl when she was in 7th grade. You can find more Lizmi designs on her instagram.

DISCLAIMER: All views and opinions expressed in this article are solely those of the contributor(s) and do not represent those of InqPOP! and INQUIRER.net. The InqPOP! The staff assumes no responsibility for any errors in the content of this material. Got something you want to share with the world? Get a chance to publish your awesome creations and share them with the world via our InqPOP! Creator Community Program. Send us your stories, videos, photos, fan fic and even fan art to [email protected]