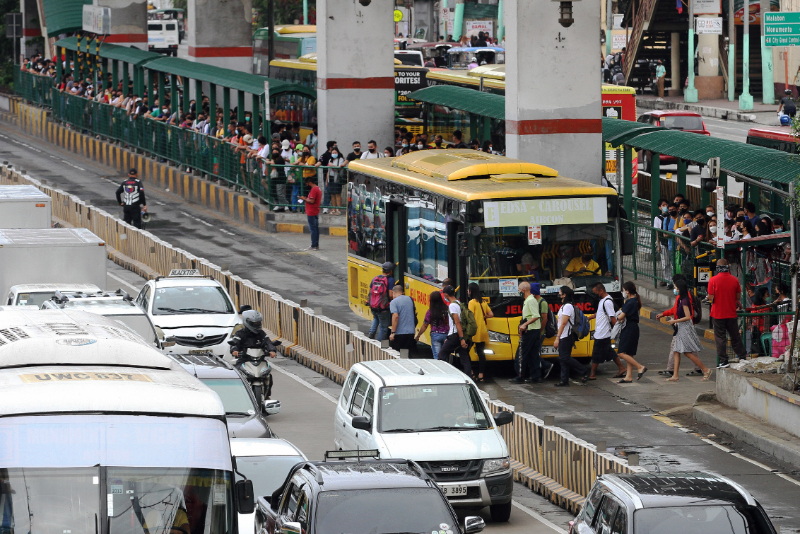 The comic validates the plight of commuters

A Filipino cartoonist-satirist has drawn attention to the worsening transport crisis in Metro Manila after a post on Twitter was seen as downplaying the daily woes of commuters.

The return from work and on-site classes took public transport short of service, with the government unable to extend most of its free bus services after July 31 due to the depletion of funds.

The Department of Transportation also recently announced that free LRT-2 services will be limited to students. This will run from August 22 to November 4 this year.

Designer ZACH July 13 published a comic depicting long lines of commuters meandering down the sidewalk in red alongside congested traffic in blue.

The commuters’ dialogues also borrowed lines familiar from the viral Twitter post which reacted to a news article about commuters’ complaints about longer waiting times in exchange for free bus rides.

LILY: Commuters are appalled by the message “libre na may reklamo pa” on the EDSA bus carousel

In response, the first tile in the comic showed bumper-to-bumper traffic and long queues of passengers, where a commuter looked over the empty airway and asked, “Sino lang ba ang mga nakinabang nito?”

Transport groups have long been faced with the Build, Build, Build project inherited from former President Rodrigo Duterte, which is pumping 8 trillion pesos into infrastructure.

During Duterte’s tenure, infrastructure spending reached a high of 5.9% of gross domestic product (GDP), exceeding the usual 5% of GDP.

But only 12 of 119 Infrastructure Flagship Projects (IFPs) had been completed by April this year, according to the Department of Public Works and Highways. This was equivalent to 70.65 billion pesos, or 1.4% of the total investment cost of 5,080 billion pesos to complete the 119 IFPs.

Transport groups have since urged the government to focus on public utility vehicles, active mobility and commuters in their bid to improve transport.

While the government was offering free bus and jeep rides for a limited time, the second comic tile saw the same commuter say that the “Libreng Sakay” service is not a long-term solution to the worsening circulation problems.

Move as one coalition previously reported the “Libreng Sakay” program as “ephemeral”.

The coalition said the scheme would quickly deplete the 7 billion peso budget of the government’s service contract scheme, where operators and drivers of public utility vehicles (PVUs) were paid based on their number of weekly trips.

The third tile replied to the remark telling commuters to seek alternative transport since they ‘didn’t have to’ endure the long queues. “Can Pero choose ba kami? reads the comic.

As the comic was widely shared on Facebook and Twitter, Filipino commuters couldn’t help but share their grievances, such as the lack of public transportation and the waiting hours.

Other Filipinos were quick to point out that the viral Twitter post blaming frustrated commuters hasn’t helped address the root cause of the transportation problem.

Instead of romanticizing Filipino resilience, some Filipinos said commuters should be able to complain freely for the government to act.

“How to paginate the Pinoy matisin? let’s stop glorifying ‘resilience’…and realize that we are suffering from the incompetence of our government,” one user said. tweeted.

“Until the [Philippines] is ready for officials, we are stuck in this endless nightmare,” a Facebook user commented.