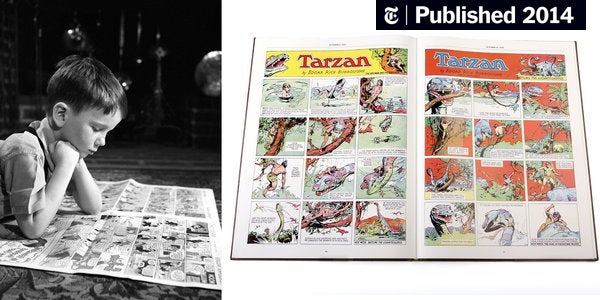 Here are some prime reading holes to dip your toe into:

‘SOCIETY IS NIX’ This book, subtitled “Gleeful Anarchy at the Dawn of the American Comic Strip, 1895-1915”, is an essential introduction to the comic book big bang that occurred at the turn of the last century. A beautifully crafted oversized treasure of Sunday Press Books, it features more than 150 Sunday comics, most printed for the first time in over a century, by more than 60 creators, in their original sizes and colors.

‘LITTLE NEMO IN THE LAND OF SLEEP’ Even though the original “Little Nemo” series spanned from 1905 to 1911, Winsor McCay’s jaw-dropping drawing and acumen for page design are unmatched in comic book history. More importantly, McCay’s Slumberland is where dream and childhood are indistinguishable. Sunday Press has released two oversized volumes of “Little Nemo,” and Taschen promises a full “Little Nemo” in April.

‘KRAZY KAT’ The surreal jumps of Krazy, Ignatz Mouse, Offisa Pup (and enough bricks to build a small town) are as captivating now as they were then George Herriman wrote them and drew them. Fantasy books published the entire “Krazy Kat” Sundays from 1916 to 1944, while Sunday Press published an oversized volume.

‘PETROL AISLE’ Frank O. King’s delightful family comic, which debuted on Sundays in 1920, is a direct ancestor of Chic Young and Lynn Johnston’s “Blondie.” “For the best or for the worst.” Impressive “Gasoline Alley” collections have been published by Drawn and quarterly and Sunday Press, and Dark Horse Comics is set to release Volume 1 full Sundays in March.

‘TARZAN: THE SUNDAY COMIC 1931-1933’ Most Hal Foster fans prefer the precise refinement of his “Prince Valiant,” but I like the raw meat of his “Tarzan” even better. In this superb oversized volume of Black HorseFoster’s Tarzan is rugged, the action and adventure are visceral.

‘PEANUTS EVERY SUNDAY: 1952-1955’ In those colorful Sundays of six decades ago, we see Charles M. Schulz’s cast evolve, along with his simple yet lyrical line. This book is a complement to the continuous and essential training of Fantagraphics. “Whole Peanuts” editorial project.