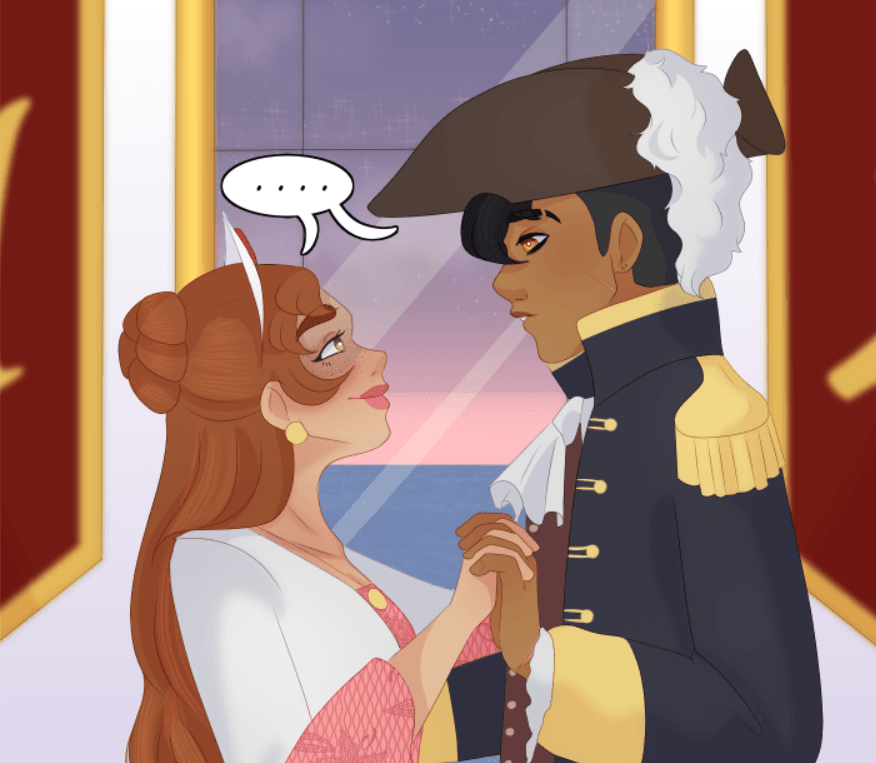 “The Pirate and the Princess”

The Pirate and the Princess tells the story of a princess kidnapped by a pirate. She goes on an adventure at sea and what she learns changes her world.

The Pirate and the Princessby Sapphire, is a historical romance centered around two characters: Princess Kirianna of Altira, an optimistic, intelligent and dedicated woman, and a pirate captain who seems like an intimidating man.

As a warning, this review discusses some spoilers for The Pirate and the Princess!

Kirianna is ready to meet a suitor but doesn’t have much luck. That is, until she bumps into the pirate captain, telling him her true interests. Before she is about to accept Philippe’s marriage proposal, the Captain bursts in. She is captured in the hope of making her father pay a ransom. Her father agrees, but she is taken away, even though that was not the original plan.

The Pirate and the Princess has compelling characters and storyline. Kiri realizes that marriage is political. She is about to get married before being taken on a pirate ship, the SM Hellfire. It was interesting to watch Tristan, the cook on the pirate ship, challenge her to marry at such a young age (20) and the logic behind an arranged marriage itself.

I liked how Kiri goes from distrusting pirates to realizing that they aren’t bad people after all. They are presented as anything but villains or monsters out to get anyone. His change of heart begins with Tristan, the cook, the Finnean cabin boy, and later with other crew members. All act like a family.

At first, it seems odd that the Captain has a dress to give Kiri. However, it is later revealed that the captain, who overthrew the former captain, Adrian, is a woman in disguise. She looks androgynous and isn’t very hyper-masculine, unlike some of the other crew members. As the comic progresses, Kiri and the Captain are drawn to each other. For example, the Captain helps Kiri when she is terrified of a thunderstorm and later reveals her name as “Mathias” and later as Maria, which turns out to be her real name.

The webcomic, which has over 80 episodes, is written and illustrated by Sapphire, with new issues released every Sunday. This is his first webcomic. It was originally written in 2013 by Sapphire and her girlfriend, now wife. According to Sapphire, it was rewritten four times before arriving at the current version!

Some of the webcomic’s strongest characteristics are its vibrant colors and style, whether it’s the characters or the backgrounds. They jump off the screen whether the comic is played on a computer or a mobile device.

The webcomic deals with heavy topics such as homophobia, child abuse, sexual assault, death, etc., making it clear that assaulting a woman is not acceptable. Even Kiri is in shock after accidentally killing a man, and her world is turned upside down when she learns the truth about her father.

There are also classic themes of evil, devious characters like Samuel and despicable ones in other ways, like Kiri’s father. I also liked the calmer, less tense moments in the comic. This includes when Kiri finds a black cat, with heterochromia, on the ship and names him Bartholomew, or when she reads a book to the crew.

Apart from Kiri and Maria, Adrian has been confirmed to be bisexual, Tristian is a closeted gay man, Nathaniel is a trans man, and there are many possible vessels among the characters. According to Sapphire, in a Q&A, the story was influenced by The Princess Bride, Pirates of the Caribbean, The Goonies, Peter Pan, Treasure Planet, and Assassin’s Creed IV: Black Flag.

The same Q&A confirmed that the story will be long, with 40 chapters for a total of 218 pages or over 145,000 words! Since it’s kind of a historical novel, it’s loosely based on the 18th century and the lives of pirates. Another Q&A said all the characters are part of the LGBTQ community.

The Pirate and the Princess is one of many recent stories that have focused on or featured pirates. This includes space pirates in Star Wars: The Clone Wars, star wars resistanceand Star Wars Rebels. There are also space pirate lookalikes in Cleopatra in spacein the episode “Pirates”, the sea pirate captain Lukkage in Gargantia on the Verdant PlanetSantiago Montes, an eight-year-old sea pirate Santiago of the seas, or the space pirates in Eden Zero.

The webcomic also reminds me of the Mysticons episode “The Princess and the Pirate”, where Zarya Moonwolf, a magical warrior, and Kitty Boon, a sky/air pirate, kiss. Their romantic relationship was confirmed by series creator Sean Jara. Unfortunately, a kiss between them was not included in the episode. Opposition from a specific show partner was not included even though Nickelodeon supported the kiss!

The Pirate and the Princess reminds me of the recently concluded anime series Fena, Pirate Princess. This series shares some of the same themes as this webcomic, albeit unintentionally.

The Pirate and the Princess is available to read on WebToon.

You can find Sapphire on Twitter. The webcomic can be supported on Patreon.