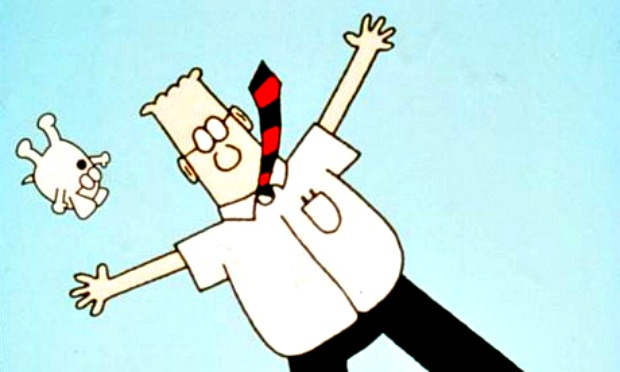 The reality of a comic strip

Do other lawyers besides me read the Dilbert comic strip?

Scroll through some recent online on the website. They are hilarious and fully aware of the vagaries of the business world. Has anyone known a Catbert, the diabolical director of human resources? What about the spiky-haired Boss? Have you ever known someone like that? What about Wally, who carries a cup of coffee while avoiding work? Did you know him? I have known them all.

Whether you’re a Dilbert fan or not (and you should be), Scott Adams, who writes Dilbert and worked at PacBell years ago, has to listen to every conversation and every act that happens in the world of music. ‘business. His bands hit near his home.

I think we practice law in a Dilbert world. Whether you’re at Biglaw, in-house, or at a company of any size, Dilbert’s characters abound and not in a good way. Dilbert’s comics are mini-how-tos on how not to treat people at work. A recent comic about the lack of positive reinforcement (self-promotion versus leadership) sparked this rant.

When I was in-house, I was always amazed at the complete lack of management training the client gave to employees when they were “promoted,” and I use that word as an art term. Far too often the ‘promoted’ employee was rewarded with more work, management responsibilities and a salary increase so small that after taxes and other withdrawals, the employee was left with bupkis to celebrate beyond the end of the day. a trip to a fast food restaurant. restaurant (Dutch dish of course).

The problem was that the new “manager” didn’t know how to manage her staff in any way, and the lack of management knowledge usually led to Catbert’s involvement, an ominous sign.

For lawyers who think an inside job is Shangri-La, I’ll share a not-so-secret secret: inside jobs aren’t what you think they are. Yes, some corporate law departments don’t require timesheets (hooray for them) and that’s definitely a plus.

However, there is little upward mobility and colleagues with such aspirations find themselves facing a ceiling, not of glass, but of concrete, and competing with others in the department with a similar mindset. . Once in a while, an intern will break through, but it’s not that often, as promotion from the intern isn’t often done. (The CEO knows someone who knows someone who would be just perfect for the job, which involves babysitting cats and routine day-to-day legal work, as well as picking up the trash left over from bad decisions.)

An important and ugly task for managers is to write and give performance reviews. Whether you are the appraiser or the appraised, it’s no fun. The employee thinks that he is doing very well, that he shines in his work, that he has either earned money for the company, or saved for the company, or both, and that his performance is excellent. Catbert, the evil HR director, accompanies the manager to the appraisal meeting (for corroboration purposes, among other things), and the two wait to pounce on the unsuspecting employee who is expecting a far above appraisal. average, a decent pay raise, and a good bonus.

On the contrary, the employee, once at the meeting, receives a written performance evaluation which not only is not excellent, but which “meets expectations”, i.e. the “meh” evaluation. Talk about a disconnect.

The issue of “sandbags” — not the kind to prevent flooding — is the one that elicits the most complaints of unfairness from employees at the time of the evaluation. The complaint is that no one ever told the employee that the work was not up to what the manager wanted, that there was no communication of those expectations. This statement should be a “sitdown” between the manager and the employee and not just an exchange of e-mails. This is especially true when there is a new manager and the employee has already received “walking on water” or “almost walking on water” notices and is now receiving a notice for the first time. “meh”. Lawyers aren’t used to being told their work is anything but stellar; our egos bruise easily.

The manager’s job is to let employees know how they are doing on an ongoing basis, not just at scheduled review time when salary increases and possibly bonuses are at stake. leadership positions wherever they are or want to be, whatever the context, understand that your responsibilities go beyond simply checking that work is being done for the care and feeding of customers. It is also the care and feeding of the staff of lawyers, paralegals, paralegals and all others that make the legal world go round. Read Dilbert for management tips on what not to do, how not to behave. Knowledge can come from the most unlikely sources.

Jill Switzer has been an active member of the California State Bar for over 40 years. She remembers practicing law in a kinder, gentler time. She’s had a diverse legal career, including stints as an assistant district attorney, solo practice, and several high-profile in-house gigs. She’s now a full-time mediator, which gives her the opportunity to see dinosaurs, millennials, and those in between interact — it’s not always civil. You can reach her by email at oldladylawyer@gmail.com.